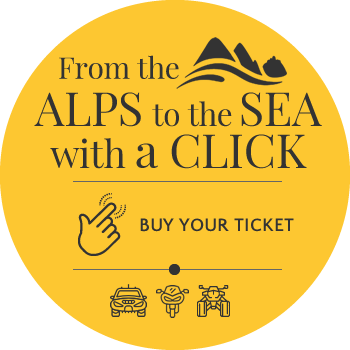 The Mediterranean Alps Cycle Route follows the southern watershed of the Alps, along the border between Italy and France. The restoration of the Upper Salt Road has extended it to the splendid unsealed roads that connect the upper valleys of the Alps to the sea and to France and Liguria. It is a cross-border loop consisting mainly of spectacular, unsealed, former military carriageable roads at high altitude, which feature fine construction techniques and impressive feats of engineering.

Part of the region, with unique environmental features, lies within the international protected area formed by the Natural Park of the Martime Alps, the Natural Parc of Regione Liguria, and the Parc National du Mercantour, and alternates vast mountain pastures, dolomitic rocks, Alpine mountains and karst formations with huge coniferous forests and mixed woodland with clearings at lower altitudes.
The area was recently nominated for inscription on UNESCO’s World Heritage List with the name “Alpi del Mediterraneo” (Mediterranean Alps), because of its unique geology, which comprises the Alpine chain and the first perennial glaciers along with a deep-sea environment with oceanic features, all within a small area.

From a naturalistic point of view, the region is characterized by its exceptional biodiversity, featuring both continental and Mediterranean species of plants and animals, some of which are endemic. The area’s towns and villages are of particular historical and architectural value.
Experienced cyclists can tackle the challenging long loop that offers breath-taking views, dotted with imposing late 19th-century fortifications, including the striking Forti di Tenda (Tenda Forts) on the mountain of the same name.

The complete loop, which is approximately 120 kilometres long with a few exposed stretches, can also be travelled by motorbike, quadbike and 4-wheel drive vehicles, and starts with the Alta Via del Sale (transit regulated and subject to toll payment) above Limone Piemonte, along one of Europe’s most scenic unsealed roads. Subsequently, at the junction for Monesi, it continues right towards the Tanarello Pass. A detour leads to the peak with Christ the Redeemer on Monte Saccarello, which offers exceptional panoramic views. Back at the pass, the route continues to climb and descend towards Collardente and then the Bassa di Sanson, from where it descends to the Chapel-Sanctuary of Notre-Dame des Fontaines, with its magnificent frescos. A sealed stretch of road leads to the French municipality of La Brigue. From here it is necessary to reach the upper crossroads of the Baisse de Peyrefique on the other side of the Valle Roja, either via Tenda, with a challenging unsealed road that passes close by Monte Agnellino and the Baisse d’Ourne, or via the easier route from Saint-Dalmas-de-Tende  which is sealed as far as Casterino. From Peyrafique a final high-altitude stretch along the mountainside leads to Colle di Tenda, passing forts and barracks. 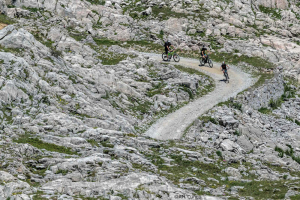 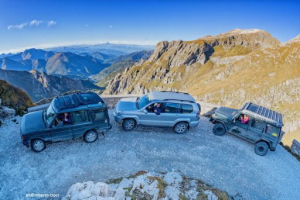 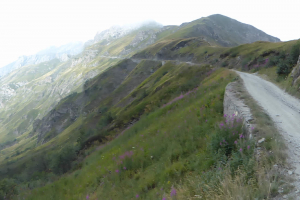 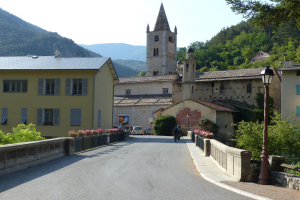 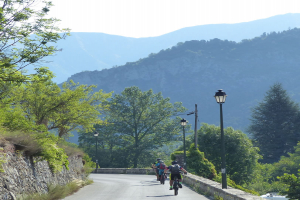